Shopping Cart
Your Cart is Empty
Quantity:
Subtotal
Taxes
Shipping
Total
There was an error with PayPalClick here to try again

Thank you for your business!You should be receiving an order confirmation from Paypal shortly.Exit Shopping Cart

The next three challenges!

Challenge No. 2 - Confit of Salmon with sweet dill pickled vegetables

The time had come for the second challenge. I this case I opted this time for a relatively simple confit salmon, using Rick Stein’s with sweet dill pickled veg. It’s not a huge dish (more of a starter) so we’ll have cheese for seconds!

It was pretty straightforward. The pickling liquor was simple and the mustard mayonnaise was easy but delicious. The fish was cooked in the sous vide at 50˚ for 20 minutes.

Overall a very successful dish. The only downside was that the charred lettuce could have been more charred and perhaps presented more attractively. Definitely a dish to do again and again! 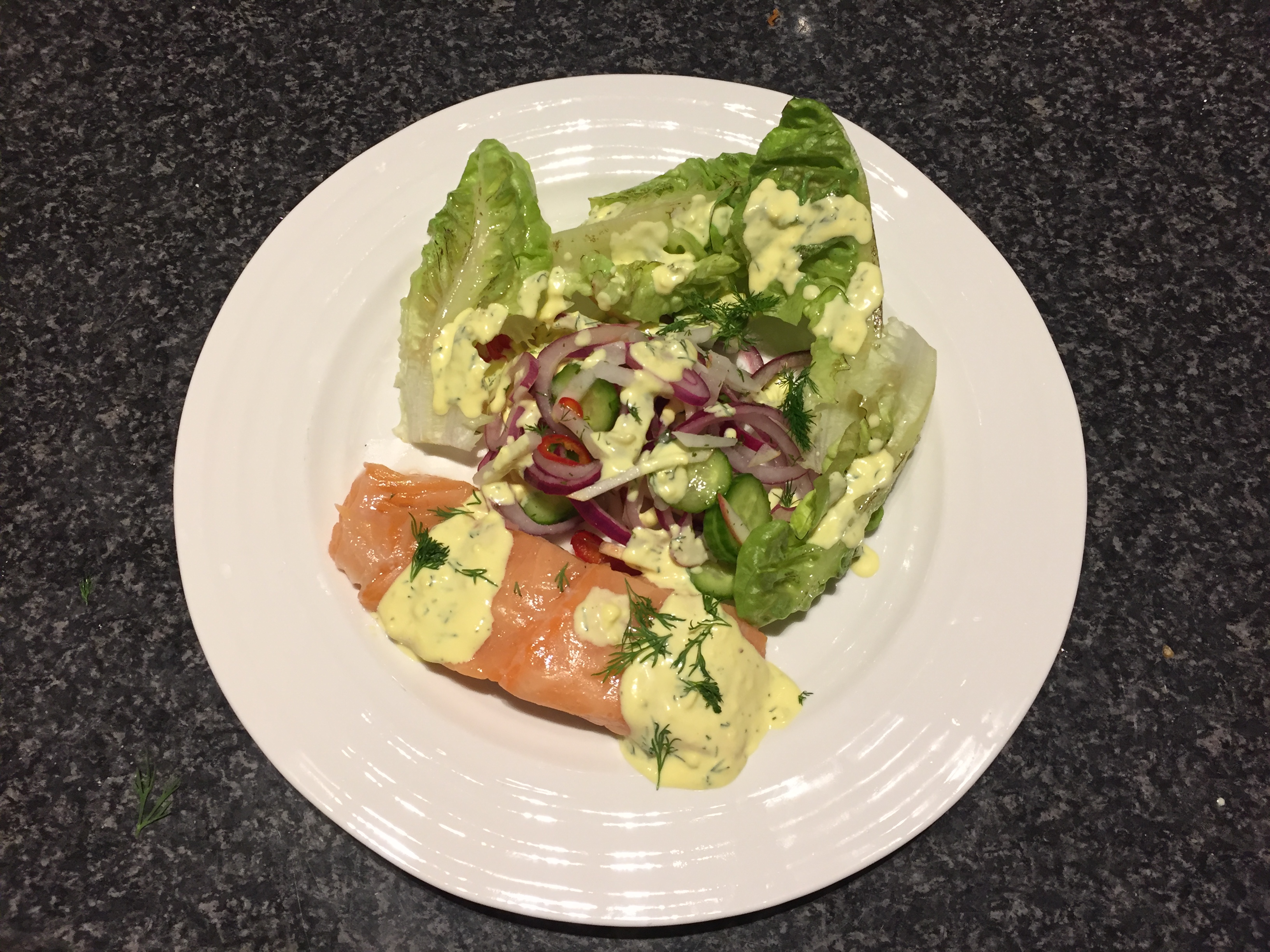 Challenge No. 3 - Roast Game Bird with all the trimmings

This was a apparently straightforward one. I used the two pheasants that Mary E had given us and opted for the Leith’s Cookery Bible version aas the basis, but also looked elsewhere for other options. The inclusion of Game Chips was one idea and clearly what the challenger had expected. Bread sauce was also a must, apparently. The Game Cook Book also suggest butter-fried breadcrumbs and brussel sprouts.

I obtained some pork fat from our fabulous butchers to bard the breasts and it was a pretty straightforward process. There were two sizes of bird, so the bigger one cooked for 40 minutes and the smaller 30 minutes. Game chips were made in the fryer and were really good (the mandoline was necessary for the thinness of the chips).

As with so many of the recipes, presentation has proved to be a challenge. What colour plate? How do you make such a dish attractive? I made a great port and redcurrant sauce to go with it and although it was very tasty, it looked like a home-cooked Sunday lunch. 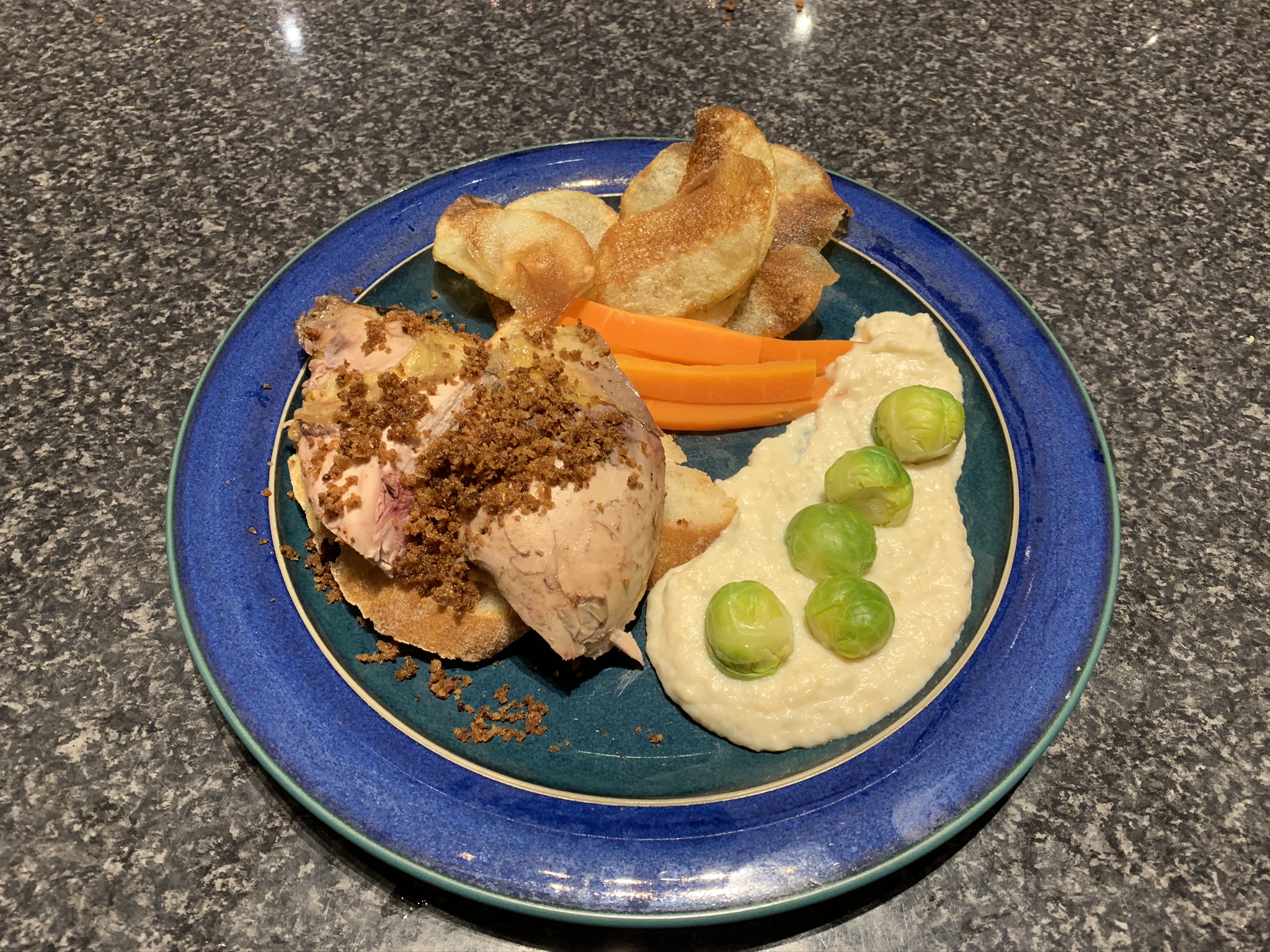 Comments from the reviewers

3. Gravy tasted better than it looked – too ‘grey’

This took a lot of preparation. The Baked Alaska with Nutella Ice Cream was from Monica Galetti’s ‘The Skills.’

It called for brioche for the base of the Alaska, so I made this the day before, along with the Nutella Ice Cream. 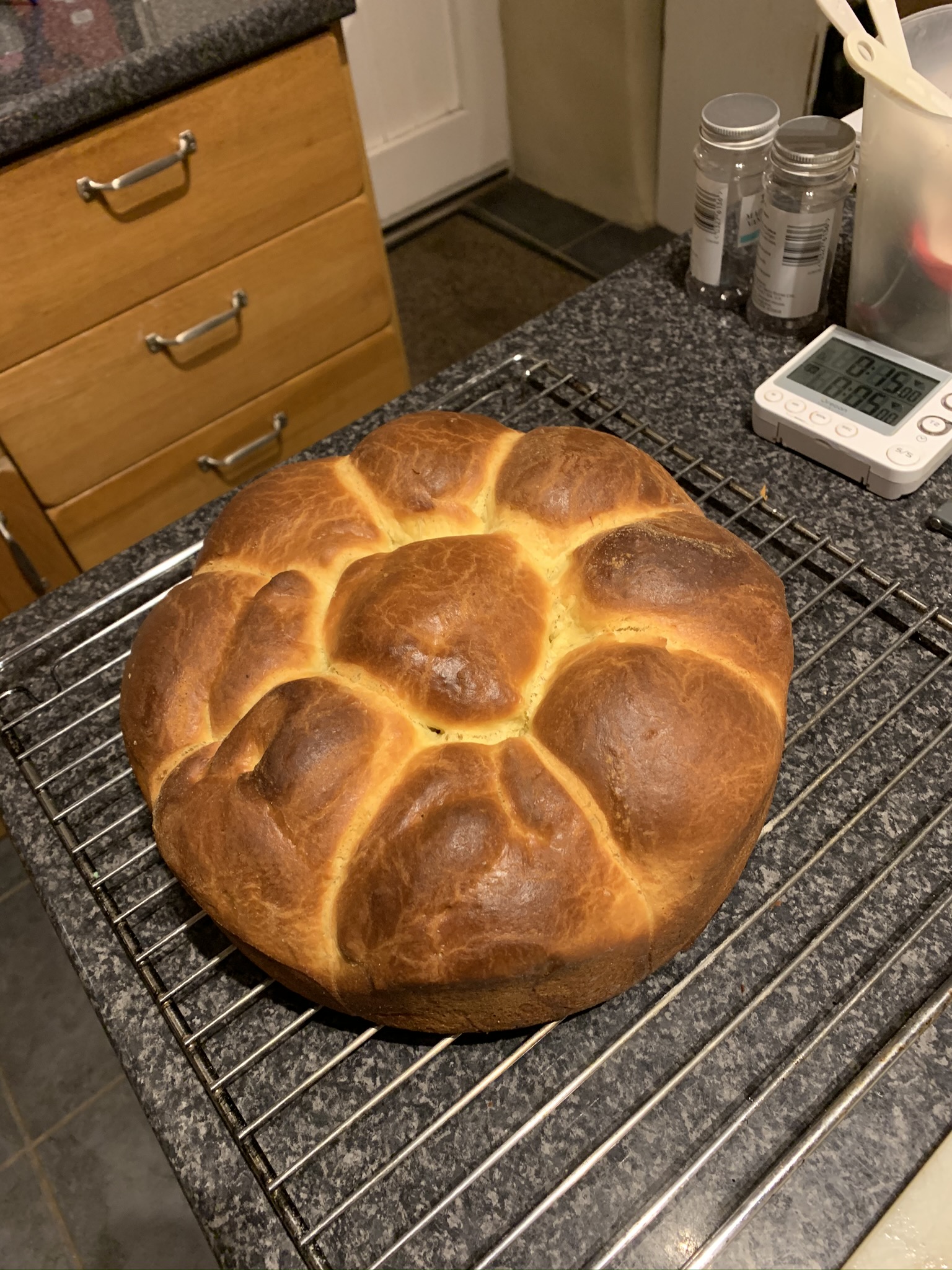 Both were relatively simple but the ice cream should have been cooled a bit more before churning in the ice cream bowl. As with so many recipes, the preparation uses a lot of bowls and stages – see below… 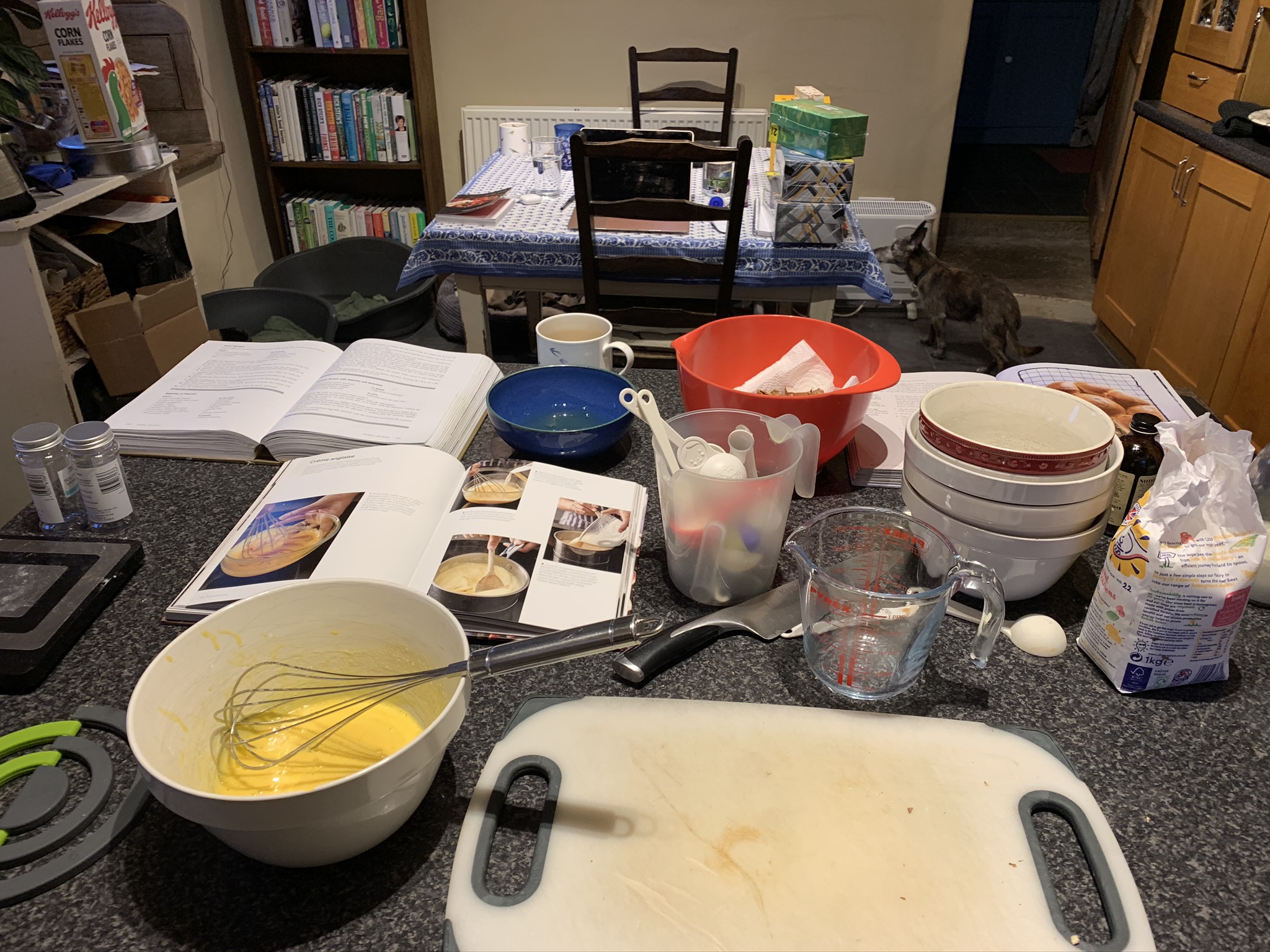 When it came to the making the Alaska, I made a base from the brioche and spread Nutella over the base. I made the base from piecing together the brioche, having cut it from the side, but it would, in hindsight, have been easier if I had cut across the bottom in a circle.

Assembling was straightforward – until it came to the Italian meringue. The meringue (my first effort) had been good in spite of the need to get the temperature of the sugar solution to 121˚.

Once the ice cream was on the base, I had to pipe the meringue onto it, but it was difficult to get pattern even and attractive. It was tasty but a mess. 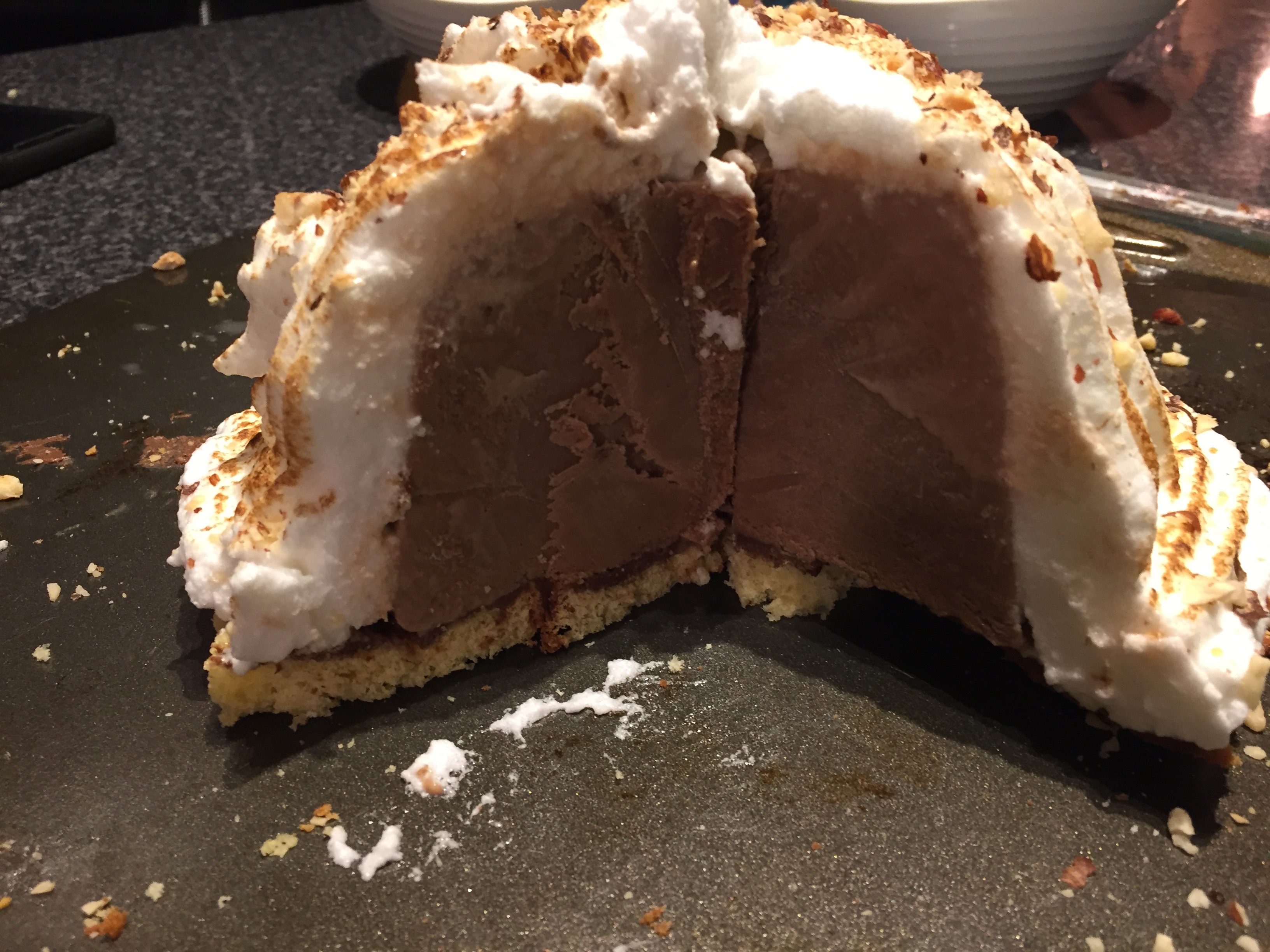 Delicious! Presentation in need of work – piping was wibbly wobbly and the brioche base was visible. Ice cream was fabulous.

Reply balenciaga speed
6:42 AM on September 3, 2020
There are certainly a variety of details like that to take into consideration. That is a nice level to convey up. I supply the thoughts above as normal inspiration but clearly there are questions just like the one you convey up the place crucial factor will be working in trustworthy good faith. I don?t know if finest practices have emerged around issues like that, however I'm positive that your job is clearly identified as a good game. Each boys and girls really feel the impact of just a second?s pleasure, for the remainder of their lives.
balenciaga speed http://www.balenciagaspeeds.com

Reply yeezy supply
10:11 AM on September 3, 2020
very nice put up, i actually love this web site, carry on it
yeezy supply http://www.yeezyshoessupply.com

Reply off white
12:17 PM on September 3, 2020
Oh my goodness! a tremendous article dude. Thank you However I'm experiencing issue with ur rss . Don?t know why Unable to subscribe to it. Is there anyone getting identical rss downside? Anyone who knows kindly respond. Thnkx
off white http://www.offwhiteclothing.us.com

Reply jordan shoes
12:47 PM on September 3, 2020
I?d should test with you here. Which isn't something I usually do! I take pleasure in studying a publish that will make individuals think. Additionally, thanks for permitting me to remark!
jordan shoes http://www.cheapjordans.us.com

Reply longchamp
3:46 PM on September 3, 2020
I discovered your blog site on google and examine a couple of of your early posts. Proceed to maintain up the very good operate. I simply further up your RSS feed to my MSN Information Reader. Seeking ahead to reading extra from you in a while!?
longchamp http://www.long-champ.us.com

Reply longchamp bags
7:49 PM on September 3, 2020
Spot on with this write-up, I truly assume this website needs much more consideration. I?ll in all probability be once more to read way more, thanks for that info.
longchamp bags http://www.longchamphandbags.uk

Reply supreme
8:34 PM on September 3, 2020
Aw, this was a very nice post. In thought I wish to put in writing like this additionally ?taking time and actual effort to make an excellent article?however what can I say?I procrastinate alot and by no means seem to get something done.
supreme http://www.supremes.us.org

Reply off white shoes
8:44 PM on September 3, 2020
After study a couple of of the blog posts in your web site now, and I really like your method of blogging. I bookmarked it to my bookmark website record and might be checking again soon. Pls check out my site as effectively and let me know what you think.
off white shoes http://www.off-whiteshoes.us.com

Reply off white jordan 1
12:27 AM on September 4, 2020
you will have an amazing blog here! would you wish to make some invite posts on my blog?
off white jordan 1 http://www.offwhitexjordan1.com

Reply golden goose outlet
2:14 AM on September 4, 2020
Once I initially commented I clicked the -Notify me when new feedback are added- checkbox and now each time a remark is added I get 4 emails with the same comment. Is there any manner you'll be able to remove me from that service? Thanks!
golden goose outlet http://www.goldengoosesneakers.org

Reply kd13
3:17 AM on September 4, 2020
Good day! I just wish to give a huge thumbs up for the nice information you have here on this post. I will likely be coming back to your weblog for extra soon.
kd13 http://www.kd13shoes.us

Reply kyrie 5
12:09 PM on September 4, 2020
You made some decent factors there. I regarded on the internet for the issue and located most people will go along with with your website.
kyrie 5 http://www.kyrie5s.us

Reply golden goose outlet
3:33 PM on September 4, 2020
Aw, this was a really nice post. In thought I wish to put in writing like this moreover ?taking time and precise effort to make a very good article?however what can I say?I procrastinate alot and in no way seem to get one thing done.
golden goose outlet http://www.goldengooseoutlets.us

Reply supreme clothing
5:05 PM on September 4, 2020
A powerful share, I just given this onto a colleague who was doing a bit analysis on this. And he in actual fact bought me breakfast because I found it for him.. smile. So let me reword that: Thnx for the treat! However yeah Thnkx for spending the time to discuss this, I feel strongly about it and love studying more on this topic. If attainable, as you develop into expertise, would you thoughts updating your weblog with more particulars? It is highly useful for me. Massive thumb up for this blog put up!
supreme clothing http://www.supremesonline.com

Reply jordan 13
7:05 PM on September 4, 2020
Nice post. I be taught something more difficult on totally different blogs everyday. It'll all the time be stimulating to learn content material from different writers and follow a little bit something from their store. I?d desire to make use of some with the content on my weblog whether you don?t mind. Natually I?ll provide you with a link in your net blog. Thanks for sharing.
jordan 13 http://www.jordan13.us.com

Reply goyard
7:24 PM on September 4, 2020
I?d should examine with you here. Which is not something I usually do! I get pleasure from studying a post that will make individuals think. Additionally, thanks for permitting me to remark!
goyard http://www.goyardus.com

Reply jordan 12
8:52 PM on September 4, 2020
I discovered your weblog website on google and check just a few of your early posts. Continue to keep up the excellent operate. I just additional up your RSS feed to my MSN News Reader. Seeking ahead to reading extra from you in a while!?
jordan 12 http://www.jordan12.us.com